Known as the oldest active lava lake on the planet, Erta Ale is a shield volcano in the Afar region of Ethiopia near the border with Eritrea.

From space, you can see that the Erta Ale shield volcano stands out as a dark patch in the Afar desert.

This is because the main type of lava that erupts from Erta Ale is basalt, which is rich in iron and magnesium and dark in colour.

Erta Ale is part of a number of volcanoes that occur along the African Rift Valley (see map) including Kilimanjaro, Africa’s highest peak.

A rift valley is where two plates are breaking apart. As they they break further you can get a sea developing – like the Red Sea – and if they fully separate this can create a new ocean. 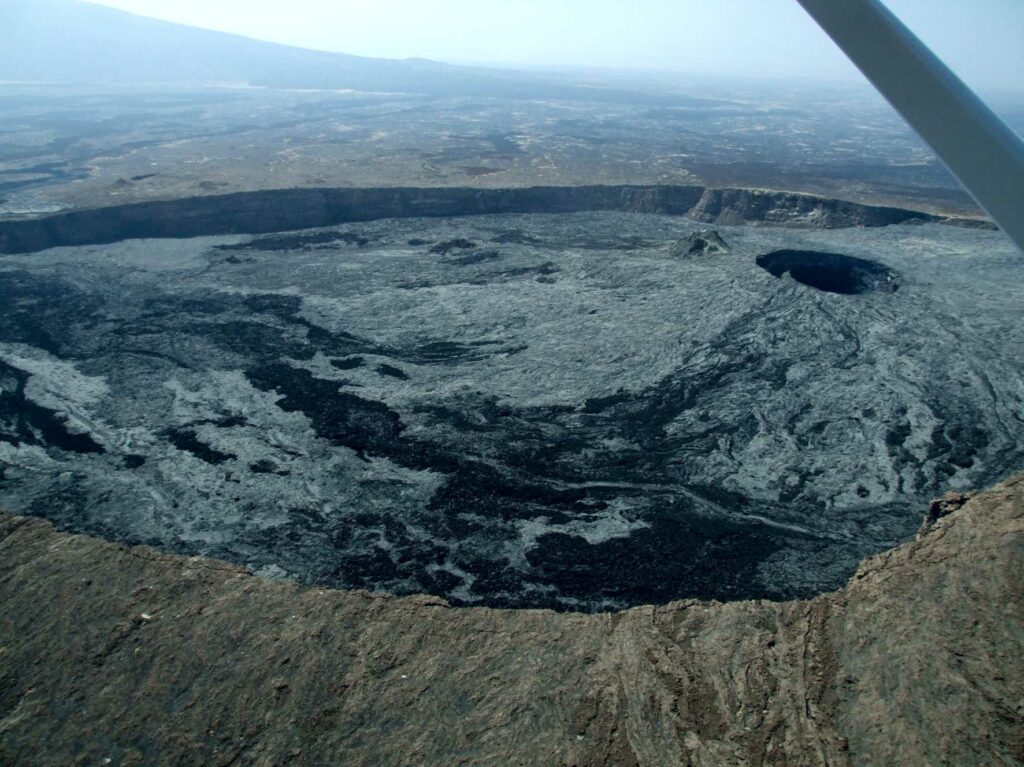 View of the larger crater area.

The larger crater area has two smaller craters within it.

View of the South Pit crater.

These images show the nature of the different craters at Erta Ale. The southern pit crater (a smaller one in the main crater area) is the one where the active lava lake is. 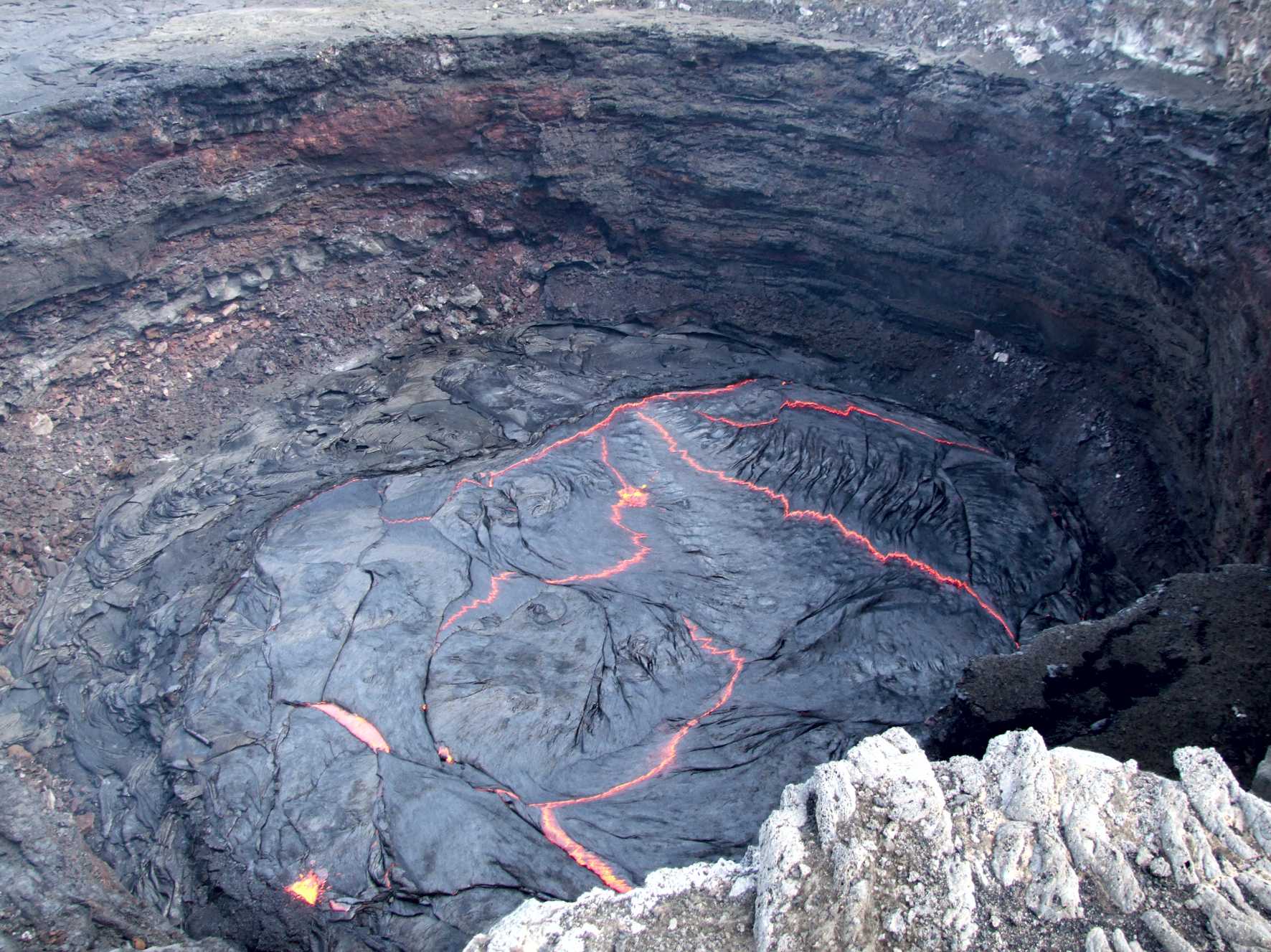 As you peek over the edge of the south crater you can see the bubbling lava lake.

Looking at a volcano in 3D … 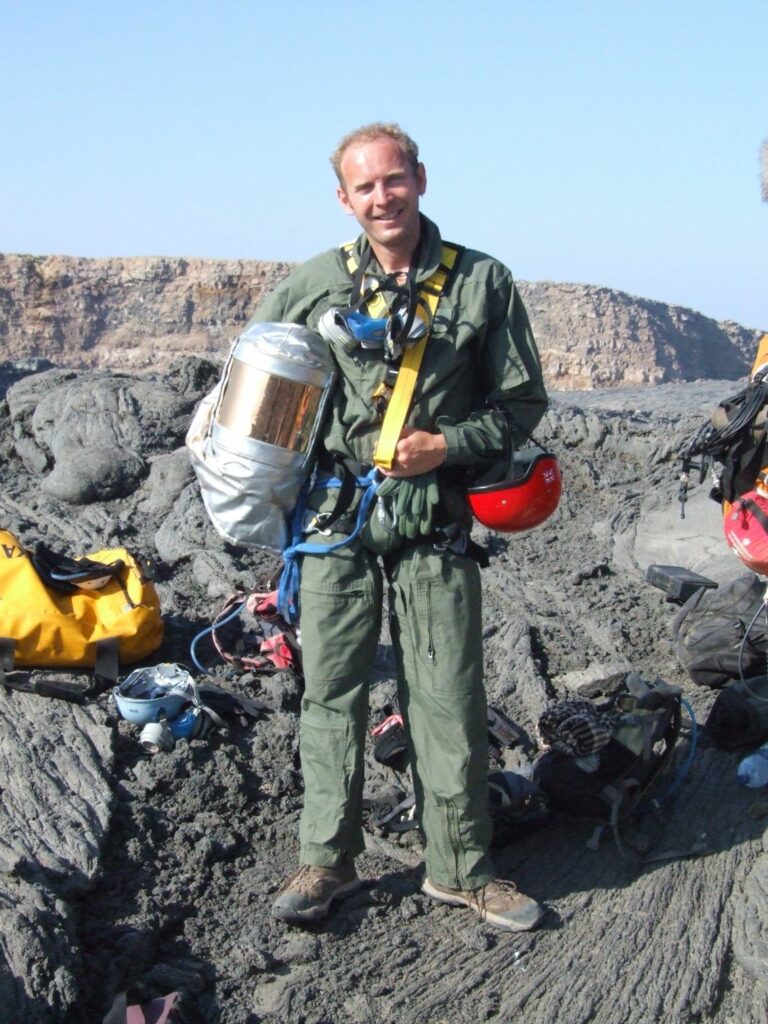 Dr Volcano preparing to go into the Erta Ale crater.

On an expedition into the Afar region, filmed by the BBC and Discovery, Dr Volcano and his team made the first 3D model of Erta Ale using a laser scanner. The model can be seen in the short video clip and features on the front of your postcard.

They had to climb down into the crater to get the full 3D model… scary stuff!
Click on the video play button to see the animation of the 3D volcano.
Image/Video credit – Dougal Jerram

There is another volcano near by that is out of this world!

The volcano is called Dallol and it is a very special volcano.

It is erupting through sediments that are made up of salt and limestone rocks, which the magma reacts with creating strange salty eruptions, acid pools and colourful sulfur deposits (yellow).

Another cool factoid is that the volcano is below sea level, making it the lowest subaerial volcano (volcano on land).

There are sulfur volcanoes on other planets such as the moons of Jupiter.

Lava heat viscosity experiment. For this activity, you can spend sometime making ramp to measure the flow speed of a golden syrup magma at different temperatures to see how the temperature changes the properties of the liquid.

You will need:
1) some Golden Syrup
2) cardboard, tape and scissors
3) Pens/pencils
4) Ruler/tape measure
5) Tablet/phone for stopwatch
6) Tablet or phone to video experiment

You will be putting your syrup magma into three conditions, the fridge, room temperatures, and warmed up in hot water.
You will need to make a ramp with ‘cm’ markings on it so that you can measure how fast the different syrup magmas flow under the different temperatures.
(Hint – you may need to video the hot one so you can play back to see how fast it travelled!!)
You can then draw some graphs from the results (e.g. time vs distance for each type) to show how the different experiments recorded different results.

Mini Dr Volcano ‘Izzy Jerram’ made a science poster of her lava heat viscosity experiment, which you can look at below for some ideas on how you might go about it. Her results have been made top secret so you will need to measure your own in your experiments. Good luck!


You can go to the previous Volcanoes secret pages by clicking the places below.