The Pinatubo eruption of 1991 was one of the largest eruptions the world had seen for some 100 years.

Mount Pinatubo is located on the northern Island of Luzon in the Philippines. It is an active stratovolcano in the Zambales Mountains, NW of Manila. In 1991 the volcano started to show signs of unrest around March and April time. Given all the signs that a very large eruption was imminent, the Philippine Institute of Volcanology and Seismology – assisted by the United States Geological Survey (USGS) – worked to convince local inhabitants of the high severity of the threat, and started evacuating people.
On the 12-15th June 1991 the Volcano suffered major explosive eruptions that reduced the mountains height from 1,745 m (5,725 ft) to 1,485 m (4,872 ft), the eruption was 10 times that of the 1980 Mount St Helens one.

The volcano was being monitored by volcanologists including a team from the USGS who were working out of the US Clark Air Base, near the volcano. Satellites were also able to collect valuable information about how the ash and gases from the volcano were affecting the atmosphere.

Pinatubo and short term climate change
Tanno and Iguda have found out that the monitoring of the atmosphere after the eruption showed that it lowered the global
average temperatures by 0.5–0.6 °C.

This was one BIG eruption!! You can see by these before and after shots taken by the USGS team, just how much of the mountain was blown away.

The volcano was so explosive that almost half the mountain was lost during the eruption as you can see from the before and after images of Mount Pinatubo. 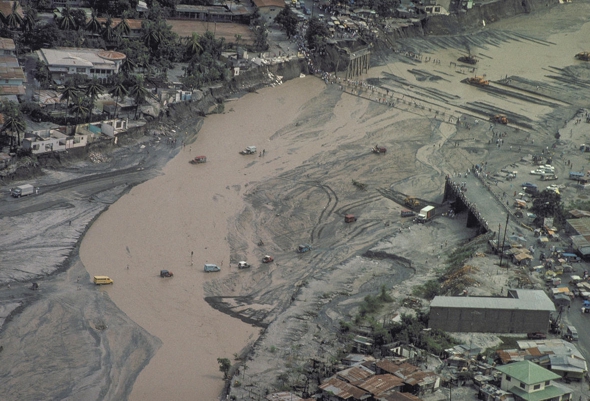 All the loose rock and ash is a major hazard after eruptions. Particularly in tropical areas where it rains a lot. It can get reworked into large mudflows, called ‘lahars’, which travel fast down valleys taking out bridges and buildings.

Tanno and Iguda have discovered that the volcano Mount Hudson in Chile erupted explosively close to the time of the Pinatubo eruption. It is thought that the combined effects of these two big eruptions helped to contribute to the short term climate changes that we saw from the NASA data.

Make a science poster about volcanic hazards. Using your knowledge gained from the Pinatubo and Mount St Helens, make up a poster that covers aspects of volcano hazards.

You can make your poster as colourful and interactive as you want – maybe, you could put flaps on it that reveal facts. Science posters are often presented at conferences to show some research and topics that scientists have been working on.